Kintsukuroi | i am april rucker 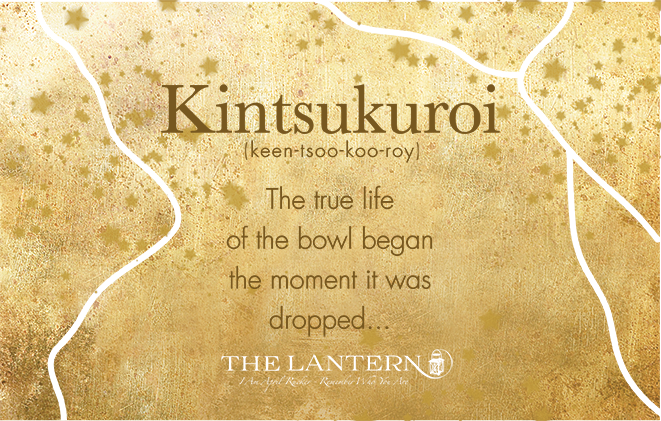 As well as a beautiful and thorough form of repair, Kintsukuroi has a deeper philosophical and spiritual significance. The mended flaws become part of the object’s design, and some people believe the pottery to be even more beautiful having gone through the process of being broken and repaired.

To go back to the origins of Kintsukuroi, we travel back to mid 1500 Japan to the story of a military ruler who had a much loved tea bowl. One day during a gathering a servant accidentally dropped the beloved bowl and it broke into 5 pieces. The gathering became silent…. for fear that the leader’s temper would erupt, another guest made a light hardy joke lifting the rooms laughter and the military ruler began to see the significance of the moment as all eyes were on him. He made a choice in that moment to honor the actuality the beloved bowl had just experienced. The military leader found a man that could use gold laquer resin to mend the bowl. As the bowl was mended with beautiful gold strands running through it, it had become more beautiful and cherished now than it ever was before.

This story goes on to say that instead of the break “…diminishing [the bowl’s] appeal, a new sense of its vitality and resilience raised appreciation to even greater heights.” The bowl had become more beautiful for having been broken.

The true life of the bowl “…began the moment it was dropped…”From that day onward, mended bowls have been used and cherished for generations in Japan. Through kintsukuroi, the cracks and seams are merely a symbol of an event that happened in the life of the object, rather than the cause of its destruction.

Like beautiful bowls, plates, tea ware, and cups we also endure our breaks, our cracks. Often times things seem irreparable, destroyed and debased. Often during these breaks and cracks our old limiting beliefs of shame, self sabotaging ways, abandonment, fear, failure… etc. come in. Often we want to take the “broken bowls”/ experiences/people and throw it away- leave it broken, and just have that brokenness out of our sight, so it’s out of our mind.

You can step out of the way and release those limiting beliefs- surrender those cracks and breaks, you can begin to weave golden threads through all the cracks in your heart, your mind, your body. Spirit can perform kinsukuroi on all the broken pieces of you, if will just step out of the way, ask and receive.

Simply say: “those beings of the highest vibration available to me now, I ask you now to come in and perform kintsukuroi on my: heart, mind, business, relationship, Heath, childhood trauma. Sit back and just be with this moment, for 5-10 minutes, as your team begins mending all of those holes, breaks, and wounds. As the golden lights of divine love come forward to offer you healing, Imagine beautiful golden liquid being poured down your entire body. Watch where the liquid goes, notice how it feels as it moves through your physical body, emotional wounds, and memories. Receive this repair modeled after the ancient Japanese art of kintsukuroi. 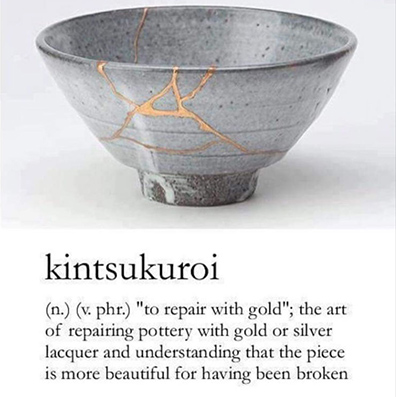 By building a connection and awareness to each of her clients through her intuitive healing work, April’s shamanic energy helps people ignite their souls, empowering them not just to live, but to thrive. Her work is expansive and collaborative, sowing seeds of inspiration for her clients, aligning her resources with their individual strengths and innate capacity for wellness so that true healing can take place.